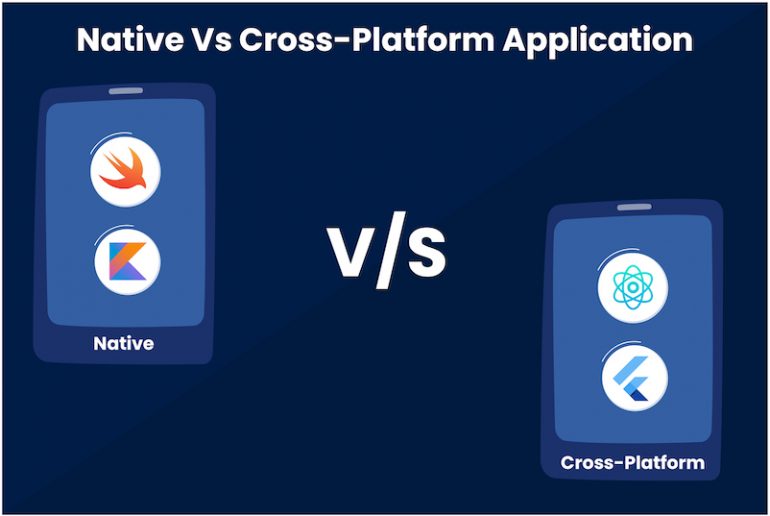 In fact, according to a recent Statista survey, 67 percent of app developers choose Native apps, while the rest favor cross-platform apps. Now you’re probably wondering which platform is better: native or cross-platform.

As per the experienced mobile app development company in India, it can be said that both approaches have advantages and disadvantages. So, it’s best to gain a thorough understanding of the differences between native and cross-platform apps before making a final decision. As a result, we’ll go over many areas of Native and Cross-Platform app development in this article. Furthermore, we’ll examine the scenarios in which a CTO can employ one of the two app development frameworks.

Native app development is concerned with creating apps for a specific platform, such as iOS, Android, or Windows. Native apps are created using platform-specific programming languages. Native Android apps, for example, can utilize Java or Kotlin, but native iOS apps use Swift and Objective-C.

The main advantage of native apps over cross-platform apps is that they can take advantage of all of the operating system’s functions as well as all of the device’s features—camera, GPS, contacts list, gravity sensor, gyroscope, and so on. Furthermore, all complicated functions, such as complex networking, memory management, and more, become easy for developers to use.

What is the most significant disadvantage? For each platform, you’ll require a distinct codebase, which takes time and money. When deciding between native and cross-platform development, it’s critical to understand the benefits and drawbacks of each framework. Let’s start with the advantages and disadvantages of native applications.

Cross-platform app creation gives you the freedom to create mobile apps using a universal language, allowing you to use a single programme across many platforms. Cross-platform apps have a single codebase and can operate on different platforms and devices at the same time. Typically, 70-95 percent of code may be reused between platforms, making development significantly faster and less expensive.

The main benefit of cross-platform development is code reuse, which simplifies the entire development process. Many businesses choose this technique because of its convenience and profitability, but it is not without problems. It can be tough to customise an app for multiple platforms at the same time.

Performance and UI/UX can be compromised at times, and hardware usage is limited. Most apps, on the other hand, do not require high performance or complicated capabilities, and would rather reach the market fast and cheaply.

Your choice has a significant impact on the app’s cost, timeliness, and user response. Before making a decision, think about all that has been said so far. Here are some more suggestions if you’re still puzzled.

Your service is entirely mobile, or you intend to make your app a stand-alone business. You work for a large corporation with a limitless budget.

So, who do you think will win in this war of cross-platform vs. native development? Well, we think this is entirely dependent on the situation, as each one has its own set of rules. If you want a dependable software with amazing performance, no budget or time constraints, and a user base limited to Android or iOS, selecting native development over cross-platform development is like hitting the goal. Cross-platform apps, on the other hand, are the ideal bet if you want to design apps that target a larger user base and are developed in the most cost- and time-effective manner.

Do you find it difficult to choose the suitable technology for your app? Let’s get rid of your concerns and put your faith in Appening, a mobile application development company in India. We understand that each company has its own set of needs for dealing with its problems. This is why we provide services to our clients in a variety of technologies, including native and cross-platform, in order to create the ideal mobile application for their business.